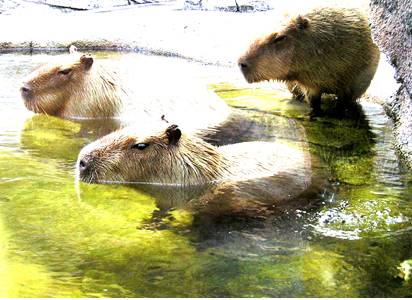 Weighing about 200lbs., it was twice as big as today’s Capybara. A semi-aquatic mammal feeding on plants that lived in or near the water in warm-climate environments. 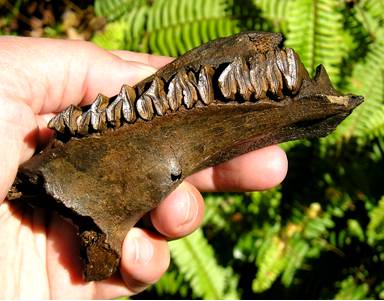 Their cheek teeth were formed with vertical enamel plates sandwiched together and were several inches long. The back molars are more compact, than the front, and all the molars have a natural cement that holds the plates together. These plates can separate somewhat easily, over time, during the fossilization period.

Its modern descendants are the smaller Capybara now living in South America and are the largest living rodents today. They are considered excellent swimmers and usually live in groups of 10 or more individuals. They reach sexual maturity at 18 months with litters of 5 to 8 young at a gestation period of 5 months. The young are about 4 lbs. at birth and are weaned around 16 weeks.

This huge rodent lived about 500,000 Years ago and became extinct about 11,000 Years ago. Fossils of this Extinct Giant Rodent have been found in Suwannee Co., Brevard Co., Palm Beach Co., and other localities in Florida.