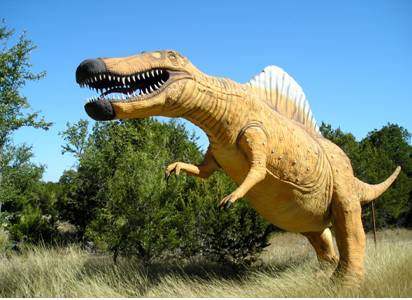 Spinosaurus aegyptiacus means “Egyptian spine lizard”, and it had giant back spines, covered with skin, that formed a sail-fin. These spines could reach 6 feet (2M) in height. This huge extinct sail-fin dinosaur may have regulated heat and its body temperature with this fin, or it may have been used as a visual status display to rivals or the opposite sex.

This meat-eating Theropod was 52-59 feet (16-18 M) long and had a height of 20 feet. It is thought to have weighed 8-10 tons. Fossil remains have been discovered in North Africa, in the Sahara Desert, and are from the late Cretaceous Period about 98-95 Million Years ago. At that time, it was a warm and wet tropical environment, unlike the desert environment of today.

This giant land predator was considered to be larger than T-Rex and Giganotosaurus, and longer than any discovered meat-eating dinosaur. It is best known from Jurassic Park III movie fame, when it was pitted against Tyrannosaurus rex, in a fight, that T-Rex lost.

Partial skeletal remains were first discovered in Bahariya Valley of Egypt, in 1912, by Ernst Stromer, a German Paleontologist. The most complete skeleton ever discovered was destroyed in Munich, Germany, by allied bombing in World War II, in 1944. There have been numerous teeth and partial cranial and skeletal fossil material discovered, in the Kem Kem Beds, of Morocco.

This huge bipedal dinosaur had an enormous, but narrow head with long conical teeth that had no serrations, and powerful elongated jaws to match. It may have specialized in catching and eating large fish.

Back to Dinosaur Fossils
Leave Spinosaurus / Go to Home Page